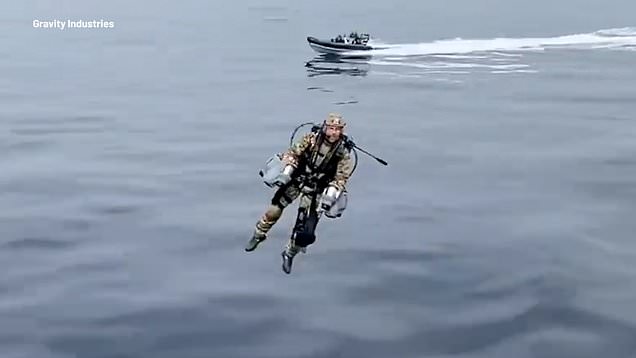 To view this video please enable JavaScript, and consider upgrading to a web
browser that
supports HTML5
video

Incredible footage released this week shows the Royal Marines using a real life jet pack to board a Navy warship out on open water.

Created by UK-based Gravity Industries, the ‘jet suit’ was used as part of a ‘visit, board, search, and seizure’ (VBSS) training operation.

In the video, one of Gravity Industries’ pilots launches from a rigid inflatable boat to land aboard the Royal Navy Batch 2 River-class offshore patrol ship HMS Tamar.

At present, maritime boarding operations usually involve the Marines using a small, fast attack boat to stealthily creep up to a larger ship and boarding with a caving ladder – usually supported by drones and snipers.

But in the future, this technology could be used out in the real world to swoop in and board pirate vessels in an instant.

While the jet suit technology is still in its infancy, Gravity Industries hopes the military will be able to use it successfully.

According to a press release, the company says it will ‘provide extremely rapid access to any part of the target vessel, instantly freeing up hands to bear a weapon, and even retaining the capability to relocate on target or self-exfiltrate.’

‘This is increasingly seen as a revolution in tactical capability for many special forces and has much broader application beyond Maritime boarding,’ the company said.

Get your need-to-know
latest news, feel-good stories, analysis and more